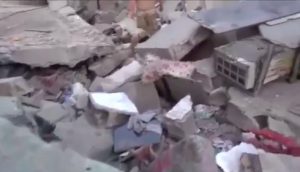 Four members of the same family, including two children, were reported to have been killed in a Benghazi airstrike today which Islamist militiamen are blaming on a French drone.

The Benghazi Defence Brigade (BDB) has posted graphic video of a collapsed building in Ganfouda with crushed bodies inside. A later clip shows children being treated for what appear to be serious injuries.

The family are said to be from sub-Saharan Africa.

There is no footage of the remnants of the munition that destroyed the property.  It is unclear what caused the BDB to decide it had been targeted by a French drone.

Ganfouda and Gwarsha are now invested by the army who after swift advances in June, now appear to be making little or no progress against the IS and Ansar Al-Sharia terrorists trapped in the coastal enclave and their allies in the Benghazi Revolutionaries’ Shoura Council.

There were reports that French special forces have been pulling out of Benghazi. The presence of these troops, believed to be with French intelligence, was revealed when three of them died in a helicopter smash last month, admitted by the French government.

It had been known for some while that a unit of specialist troops had been based near Benina.  Following the helicopter wreck, Presidency Council head Faiez Serraj met France’s ambassador to Libya, Antoine Sivan, on the edge of the Arab League summit in the Mauritanian capital Nouakchott and delivered a formal protest.

The speculation is that French forces are pulling out as a result of that meeting. However, the evidence for the withdrawal seems slight. One anonymous source told a Turkish news agency that there did not seem to be as many French soldiers around as before.