Sirte radio station retaken from IS 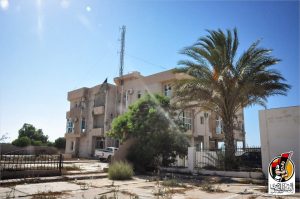 An IS judge was among the dead found when Bunyan Marsous forces overran the Ouagadougou Centre, as today the radio station was also seized from the terrorists who are being squeezed into a largely residential area in the north of the town bordering Sirte’s sea shore.

The body of the judge, named by Lana as Abu-Mohamed Al-Ferjani was found with other terrorists near the centre on Thursday. BM media have posted pictures of the interior of the Ouagadougou which show the wreckage caused by the fighting, as well as the badly damaged Ibn Sina hospital which the terrorists seized in February 2015.

Triumphant fighters are show holding up captured IS banners while, despite the continued presence of snipers, the Libyan flag has been hoisted on make-shift flagpoles and from building high points.

Sirte’s radio station was one of the first locations to be taken over by IS in February last year and was used to broadcast IS propaganda. In the fighting in June the station briefly went off the air for a reason unknown but returned after a week.

There are unconfirmed reports that a cache of documents, only partly burnt, was discovered in the centre, giving details of IS personnel and also of planned terror operations in Italy.

Despite their evidently desperate military position, IS social media continues to put out positive messages. Perhaps in a deliberate echo of a Bunyan Marsous report last month on how civilian volunteers are keeping fighters fed on the front line, IS today posted pictures of the food that had been prepared for their men.

The terrorists do not appear to be running out of ammunition, nor food, even though the BM  commanders maintain that they are completely surrounded. Support from the sea, which would seem to have kept terrorists in Benghazi in the field, is said to be impossible in Sirte. The Miratans have converted one of their Freezone port tugs into a gunboat. Last month a coastguard commander said there were other vessels patrolling off the coast to stop terrorists from escaping or receiving supplies and reinforcements.

Among the more than 30 air strikes launched by US warplanes, the targets reportedly destroyed included a tank, a truck bomb and various other vehicles and defensive positions. There has been no report of any significant ammunition dump being hit.