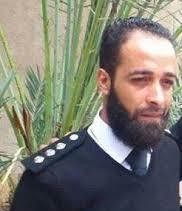 Tripoli is tense this evening after Haitham Tajouri sent his Tripoli Revolutionaries’ Brigade militia to attack predominantly Misratan intelligence personnel in the capital today and is thought to want to arrest Sheikh Sadek Ghariani, head of the Dar Al-Ifta.

The chief of intelligence,  Mohamed Muftah Nuh, a Misratan, is believed to be on a visit to Turkey.

In early morning raids with technicals and armoured cars, members of Tajouri’s TRB took over the Intelligence HQ in Fornaj, a building in Salaheddin and a site in Ain Zara as well as the intelligence offices at Mitiga Airport and Tripoli port.

There are unconfirmed reports that one man died in the Fornaj attack. The three portable cabins used by intelligence officers in Ain Zara came under heavy fire early in the morning and were burnt down. Militiamen also stormed some nearby apartments apparently searching for particular individuals.

Though no precise figure is yet clear, one source has said that “many” intelligence personnel have been seized.  It is also understood that Tajouri’s men were supported by some intelligence officers who oppose what they see as Misratan and Islamist domination of the intelligence apparatus.

Nuh was an economy minister in Ali Zeidan’s government. He is said to be close to the Libyan Islamic Fighting Group and to have caused resentment in the intelligence establishment by appointing Misratans to key positions.

It is also being reported that Tajouri is seeking to arrest Ghariani. Posters have been seen in Tripoli with a picture of the former Grand Mufti with a “No Entry” sign across his face. The posters read “No to the Muslim Brotherhood” and “Stop the bloodshed”. 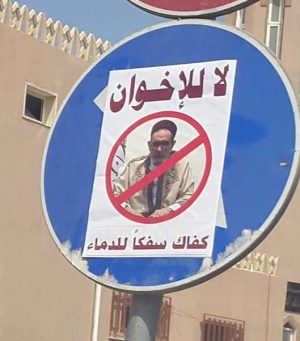 Anti-Ghariani posters have gone up in Tripoli (Photo: social media)

There has been no response from the Presidency Council to today’s events, just as there was no public reaction when Tajouri’s men took over the health ministry building last week.

It is unclear what has prompted the controversial militia leader’s actions. Last November Tajouri briefly seized the prime ministry, then occupied by Khalifa Ghwell, prime minster of Libya Dawn’s  National Salvation government, set up by the rump of the General National Congress.

He once declared himself in favour of a return of the monarchy. He is however also one of a number of militia leaders who have been named by the United Nations as suspected human rights criminals. He has been accused of murdering Qaddafi regime personnel who had been detained in an illegal prison at his Al-Naam camp in Tajoura.