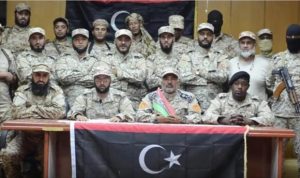 The Benghazi Defence Brigades have pledged loyalty to Sheikh Sadek Ghariani, the head of the Dar Al-Ifta who has called a jihad against the troops under the control of armed forces commander-in-chief Khalifa Hafter.

The BDB backed the sheikh in a statement beneath a formal photograph of camouflaged militiamen flanking the brigade’s commander Mustafa Sharksi.

Last month the BDB launched a thrust from Ajdabiya toward Benghazi and the encircled IS, Ansar Al-Sharia terrorists and the militiamen of the Benghazi Revolutionaries’ Shoura Council.

However in fighting, the details of which remain unclear, the army appears to have stopped the BDB column which then appears to have cut south. The army claimed at the time that Sharksi had been captured.

The BDB’s statement may have been prompted by the appearance in Tripoli of posters denouncing the Muslim Brotherhood and Ghariani and calling for an end to bloodshed.