Five BM dead as IS pushed back into last Sirte district 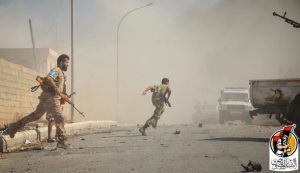 Even though Bunyan Marsous forces shot up two IS car bombers before they could reach their targets today,  five fighters were reported killed and at least 25 injured during the advance into remaining terrorist positions in Sirte.

“The first car bomb we stopped was in District Number 2” BM media official Ahmed Ruaiti told the Libya Herald. “ The other was on the highway that connects Districts 1 and 3”.

Ruati continued:  “Early this morning our forces started an extensive operation to liberate District 2 and by the afternoon it was completely under our control”.

This meant, he said that IS terrorists were now hemmed in to District 1 and had their backs to the sea.

He admitted however that commanders were advancing cautiously because they feared the loss of more men.

Until today, car and truck bombs have used less frequently by the terrorists. This was taken to reflect the loss late last month of a sophisticated bomb-making factory in the west of the town.