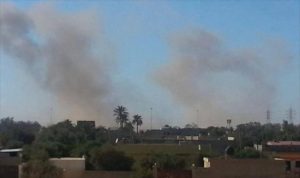 An army spokesman has admitted that Saiq Special forces had today paid a “heavy price” as they advanced further in Gwarsha. At least ten men, including an unnamed senior commander were killed and some 35 injured in the fighting.

Most of the dead and wounded, he said, were victims of Improvised Explosive Devices and mines. However a social media site connected to the Benghazi Revolutionaries’ Shoura Council carried footage showing what it said was a rocket exploding beside four soldiers who were advancing in single file. Given that the camera was already focused on the scene before the explosion, it seems possible that the men were caught by the remote detonation of an IED.

The most intense fighting happened near the unfinished European hospital.

Despite apparently being surrounded in Gwarsha and Ganfouda, the IS and Ansar Al-Sharia terrorists and their allies in the BRSC still seem to have the weapons, ammunition and explosives to resist the army with deadly effect.

In the course of the day were was a number of air strikes and assaults by at least one assault by a helicopter gunship.  This morning, clouds of smoke billowed over a target in Gwarsha.