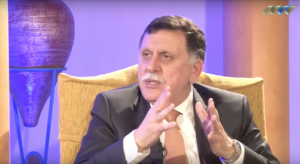 A week after some of his offices in the capital were seized by Haitham Tajouri’s Tripoli Revolutionaries’ Brigade militia,  intelligence chief  Mohamed Muftah Nuh has said he had foiled a plot to assassinate Presidency Council head Faiez Serraj.

Nuh, who was believed to be in Istanbul when the Fornaj intelligence HQ was assaulted by Tajouri’s militiamen, has told the Turkish news agency Anadolu  that his organisation had thwarted the terrorist plot to kill Serraj.

“The intelligence service has recently arrested the head of a Daesh [IS] cell, who was planning an operation against the prime ministry when Serraj was inside” said Nuh.

He said the arrested terrorist was a Libyan, Abu Moaz Al-Ansari.  However, he gave no details of  the plot, nor how it was uncovered and how and where Ansari was detained.

The revelation comes after five intelligence buildings in the capital were attacked on 14 August by the TRB.

Tajouri has said that he will only pull his men out of the sites when the Presidency Council has fired Nuh.

The intelligence service said in a statement that it had been the victim of a conspiracy mounted from both outside and within the organisation. It also said that the attacks had been launched so that documents could be stolen.

It insisted that  it remained committed to the government and to the maintenance of security in Libya.