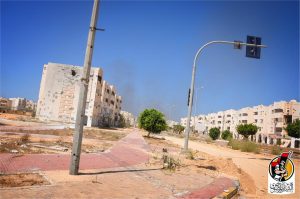 Some of the Sirte apartment blocks cleared of IS today (Photo: BM)

Bunyan Marsous forces today captured the IS police headquarters in Sirte and took over 200 apartments as the terrorists were squeezed into a still smaller part of the town.

Unlike Thursday, when suicide bombers in a truck and car managed to kill ten and injure 65, today two car bomb attacks were shot up before they could reach BM lines.

There were two more US air strikes against sniper positions. There were also attacks by warplanes from Misrata  as well as coordinated artillery fire.

There are no details of any casualties in today’s fighting.  Misrata Central Hospital continues to appeal for help as its limited resources are stretched to the limit.

The main IS police centre, which was also used as a prison, was in the old government security base.  It is not clear if any prisoners were freed. Also captured today was a number of government buildings including the meteorological office, the local LTT premises, an education centre and the Red Crescent HQ.