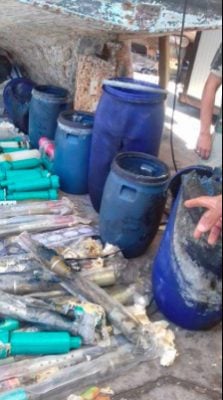 Part of the haul of munitions seized off Benghazi (Photo: social media)

Jubilation at the successful interception of a consignment of terrorist weapons off the coast yesterday was tempered today with news of more army casualties and the continuing deadly random bombardment of the city from insurgent positions.

Two members of Saiqa Special Forces died on their wounds sustained last week in an IED explosion that killed outright four of their comrades.

The capture of a launch towing plastic barrels packed with explosives and ammunition was a sign, said an army source, that the terrorists hemmed into Gwarsha and Ganfouda were running out of supplies. Yet the ability of IS and Ansar Al-Sharia terrorists along with their allies in the Benghazi Revolutionaries’ Shoura Council to keep on fighting has been one of the oddities of the army’s operation against them.

When in February, after months of fighting, the army finally overran the small port of Mreisa, to the west of Benghazi, it was assumed that the supply of arms and ammunition as well as fresh fighters had been interdicted. Yet the terrorists have continued to mount counter attacks and launch substantial truck bombs, such as that earlier this month which killed and wounded 100  soldiers.

Equally the two other terrorist enclaves in the city, in Sabri and Suq Al-Hud have continued to hold out. Indeed two troops were killed on Saturday when they tried to mount a raid on a property in Suq Al-Hud.

The terrorists have also been able to keep up random rocket mortar fire on areas of the city from which they were driven long ago. Today one man died and at least five other people were injured in such attacks.