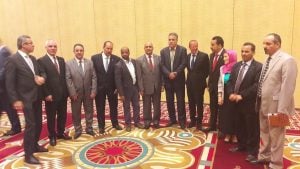 Kobler in Cairo with members of the HoR

UN Special Envoy Martin Kobler arrived yesterday in Cairo for talks with the Egyptian government as well as the Arab League on how to break the current political impasse in Libya.

He flew to to the Egyptian capital from the UAE where the previous day he had had similar talks with its minister of state for foreign affairs, Anwar bin Mohammed Gargash.

Both the UAE and Egypt are key players in the Libyan crisis, backing General Khalifa Hafter with equipment and other means of support, although officially both accept the internationally-recognised Presidency Council which Hafter opposes.

In the UAE, Kobler also had talks with Libya’s ambassador there, Aref Nayed, and in Cairo with former prime minister and leader of the National Forces Alliance, Mahmoud Jibril.

Additionally in the Egyptian capital Kobler met a delegation from the House of Representatives, led by Misrata member Mohamed Raeid and mainly comprising those who support the Presidency Council (PC) and previously boycotted the parliament’s sessions.

They had gone to Cairo to try and persuade their counterparts in the Egyptian parliament to take a more positive stand in support of the PC.

Despite the diplomatic journeying, there is no indiction as yet that it has moved the Libyan situation forward. 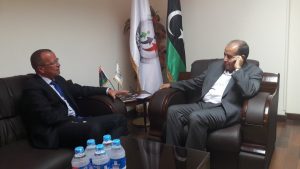