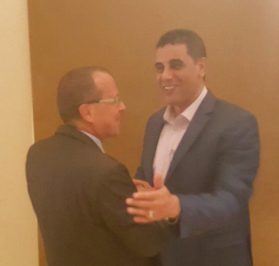 Boycotting member of the Presidency Council (PC) Ali Gatrani is refusing to rejoin it, ostensibly on the grounds that that it is meeting in Tripoli.

Last week, when the House of Representatives (HoR) voted to reject the current Government of National Accord and called on the PC to submit a new, slimmed-down list of minister, HoR president Ageela Saleh called on Gatrani and the other boycotter, Omar Al-Aswad, to return and take part in its deliberations on the new cabinet.

Aswad announced he would do so on Thursday.

The PC is meeting in Tripoli. This is unacceptable says Gatrani in a letter issued yesterday, Saturday, because of the presence of armed miltias which control the city. he would only attend once the capital was protected by the regular army and police. He also claimed that meetings of the PC should be in Tunis.

The refusal was expected. Gatrani, who remains in Cairo, is close to Khalifa Hafter who is opposed to any government that comes from the PC.