Heavy BM casualties as noose tightens on IS in Sirte 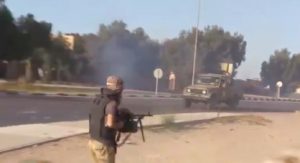 Bunyan Marous today fighter paid a heavy price as they advanced on the last two IS-held Sirte districts. At least 35 were killed and more than 180 injured. Throughout the day, Misrata Central hospital reported the death toll mounting.

BM media said that the terrorists had launched five car bombs. It appears that only one of them was destroyed before it could do any damage.  This weapon, together with IEDs, booby traps and sniper fire has again accounted for the majority of BM casualties.

It is clear from footage published today that some BM fighters still think the most effective way of attacking is to run into the middle of an open area and let off a belt of ammunition in the direction of the enemy. They then duck back to rejoin their comrades. Today, one such act of bravado came very close to hitting the cab of a technical that had reversed toward IS positions. These single acts of exposure without covering fire provide terrorist snipers with excellent targets.

BM says that around 1,000 fighters are closing in on districts 1 and 3 where IS fighters are still holding out. The break in the fighting since Thursday was reportedly to allow wives and children of terrorist fights to leave, though there is no clear evidence that this has happened.  The battle for Sirte has progressed with a series of pauses of several days in between attacks.

The final stages of the advance are proving expensive in human lives. It now seems that more than 400, mostly Misratan fighters have been killed and well over 2,000 wounded since May.  As of yesterday, BM was admitting that 370 men had been died but hospital sources suggest the toll is higher.

Approaching 100 US air strikes by fast jets, drones and more recently helicopter gunships have targeted IS strong points and suspected vehicle bombs. Overnight there were more air attacks, very probably by American warplanes, to soften up the terrorists before this morning’s assault. Through the morning, a black pall of smoke was rising from within IS territory. Fighting had actually begun last night in District 2. One report said that the terrorists had tried an abortive counterattack.  A maritime blockade, led by a converted Misratan Free Zone tug has sought to stop terrorists escaping or being resupplied by sea.