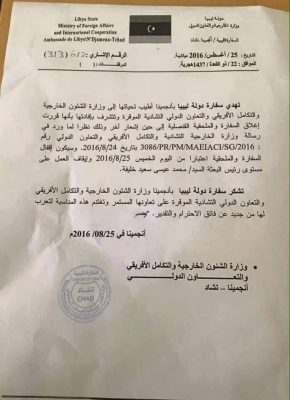 The Libyan embassy in the Chadian capital of N’jamena has suspended work until further notice following an order from the government of Chad to close.

The official reason, as given by the Chadian foreign ministry, is that there are too many Libyan diplomats at the embassy. According to an embassy statement, the foreign ministry ordered 12 diplomats to leave the country a week ago, giving them 48 hours to do so.

After Chadian insurgents move from Libya to Chad, U.S. embassy reiterates the need for a Libya free from foreign interference and in control of its borders

Complaints about overstaffing at Libya’s embassies abroad and the costs involved have been voiced by members of the House of Representatives as well as by the Government of National Accord.

It is thought, though, that there are other reasons for Chad’s action.

Relations between the two countries have long been difficult and fractious. From the outset, the Qaddafi regime constantly meddled in Chad’s internal affairs, trying either to install a puppet regime or take it over, seizing Aouzou Strip in the north of the country in 1971 and on four ocassions between 1978 and 1987 sending Libyan forces to try and force its will on the southern neighbour.

Chadian President Idriss Deby, whose rise to power stemmed from his participation in the Chadian-Libyan conflict, is known to be particuarly sensitive over any perceived attempts by Libya to dominate his country.

In an interview published just over a week ago last week in the German magazine Der Speigel, Faiez Serraj, the head of the Presidency Council said that in order to stem the flow of migrants crossing the Mediterranean from Libya, Europe had to put pressure on Libya’s southern neighbours of Chad and Niger to take border controls more seriously.

There have been concerns in N’jamena too about the treatment of Tebus living in the Aouzou strip who were granted Libyan citizenship in 1972 but who since the revolution have been rejected.

Hafter moves to extend military rule to the south