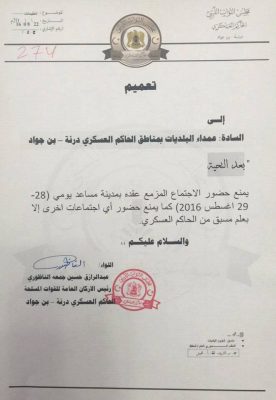 A planned meeting of Libyan mayors in the eastern border town of Musaid next Sunday has been banned by Abdul Razzaq Al-Nazhuri, the chief of staff and military governor of northern Cyreanica.

The meeting was organised last week and was due to discuss all Libya’s problems, including the Government of National Accord and the appointment of a head of state. Mayors from the west and the south as well as the east had said they would attend.

A fortnight ago, Nazhuri suspended Benghazi municipal council and appointed a military man to run the city.

General Khalifa Hafter, the head of the Libyan National Army, and those around him are known to have scant sympathy for democracy and to want to have all municipalities and all state organisations headed by someone from the armed forces.

Nazhuri in flying visit to Zintan

US airstrikes against IS in Sirte reach 74: Africom