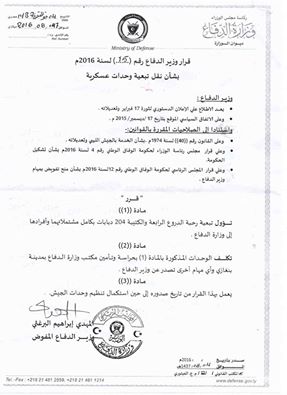 The Presidency Council’s interior minister Colonel Mahdi Al-Bargathi and General Khalifa Hafter are locked in a power struggle over control of Benghazi’s all-important 204 Tank Brigade, which Barghathi commanded before his ministerial appointment.

He has now issued an order for it to protect his defence ministry buildings in Bengahzi.

The brigade, along with Saiqa Special Forces commanded by Colonel Wanis Bukhamada, has been one of the most active in the fight against the militants in Benghazi.

Most members have remained loyal to their former commander, who despite the opposition of Hafter, has managed on a number of occasions to go back to Benghazi and confer with them. He did so last month. However, it is still unclear if he was the intended target of a car bomb explosion on his departure after his meeting with the brigade.

Despite that loyalty, the present tussle could still split and weaken it.