Prince Mohamed warns of dangers ahead on Army Day

By Ajnadin Mustafa and Ibrahim Drissi. 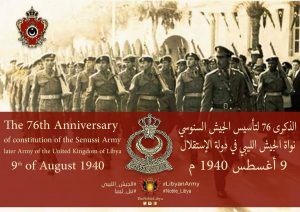 In a rare public address, Prince Mohamed Al-Rida Al-Senussi has warned that Libya is on a “dark path” because of its divisions. The political splits and fighting in the country had to stop immediately, he said. Instead, Libyans should use reason and dialogue to bring the country together. The speech by the prince,  the son of the late Crown Prince Hassan and regarded by many as the legitimate heir to the Libyan throne, was to mark the 76th anniversary of the founding on 9 August 1940 of what became the Libyan army.

That army, he noted, had been wholly apolitical until Qaddafi took over in 1969. Not only had it limited it role to defending the country’s unity and sovereignty, it had not been run on tribal lines. Libyans from across the country have been able to rise up through the ranks regardless of where they came from.

As during the period of the monarchy, the 9th August is again kept as public holiday to mark the founding of the army, and this was again the case today in both Tripoli and Benghazi. In the capital, though, unlike last year when the Ghwell “government” organised an Army Day parade in Martyrs’ Square, there was a somewhat restrained and largely symbolic commemoration. It took place at the Tikbali camp in the south of the city.

In Benghazi, today’s celebrations were largely confined to Hadaiq district because, according to reports, of concerns there might be an attack if a parade was held in Kish Square.