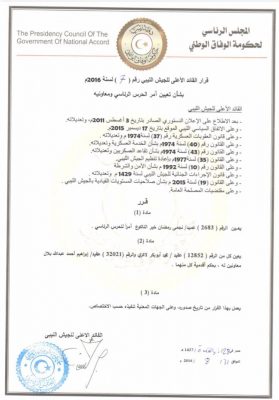 Faiez Serraj, as head of the Presidency Council, has finally named the commanders of the much delayed presidential guard. In overall charge is Colonel Najmi Ramadan Khair Al Nakua with colonels Mohamed Abu Bakr Laqri and Ibrahm Ahmed Abdullah Bilad as his deputies. Both are expected to act as mentors to the younger Nakua.

It has taken nearly four months for the appointments to be made. The presidential guard, to be drawn from the army, the police and some of the militias and which will act as an elite force to protect both the PC and sovereign institutions such as the Central Bank of Libya, was officially established at the beginning of May. However, its composition has been a cause of concern, particularly for Misratan forces. They are known to be opposed to anyone, other than fellow Misratans, protecting the PC.

It is not know how many men have been recruited into its ranks so far, if any, let alone when it will become active. A number of foreign countries, however, have said that they would provide training for it.

The appointment of Nakua was formally made in the name of the whole Presidency Council acting as the corporate supreme commander of the Libya armed forces.

Last chemical weapons out of the country