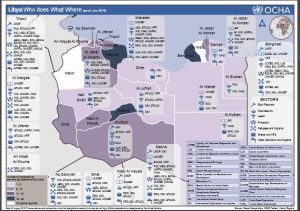 The latest UN Humanitarian Aid report to Libya paints a grim picture and says it is lacking funding (UNOCHA).

The UN’s latest Office for the Coordination of Humanitarian Aid report says that despite the conflict in Libya continuing to take its toll on the population and an increase in economic hardships, the humanitarian community has distributed assistance to every province in Libya.

This included critical food supplies, medicines and healthcare, non-food items, protection and education services. The UN says that the response to the displacement from Sirte remains a top priority, with thousands of people still dispersed due to the ongoing military operations to retake the city from Islamic State.

The UN said that as more people return to their homes, concerns grow over the risks they face from explosive remnants of war (ERW) and unstable buildings damaged in the fighting.   Ensuring a steady supply of essential medicines is the most critical activity for humanitarian responders across Libya, as hospitals run out of stocks to treat illness and injury, the report says.

The report says that the UN has made requests for US$ 165.6 million for humanitarian projects, but that only US$ 48.3 million or 28 percent of projects have been funded.

The International Organization for Migration (IOM) in its report covering July and August has said that it has maintained geographic coverage and conducted assessments in 533 locations, an increase of 17 locations on the previous report.

The report identified and located 348,372 internally displaced people, 310,265 returnees, and 275,857 migrants in the country. It said that it continues to work in close coordination with Libyan and international partners by providing the data necessary to facilitate the planning and delivery of humanitarian assistance for the most vulnerable populations in Libya.

The report findings show that 86 per cent of the 348,372 IDPs (69,435 households) currently displaced in Libya fled their homes between July 2014 and the present. The main areas where IDPs are residing are Benghazi, Bani Waled, Ajdabiya, Abu Salim (Tripoli) and Al Bayda, and most frequently cited areas of origin for the majority of IDPs across Libya are Tawergha, Sirte and Benghazi.

While 84 per cent of IDPs are residing in private accommodation, either renting or being hosted with others, the remaining 16 per cent are currently in public settings, most heavily concentrated in schools, informal settings (tents, caravans and makeshift shelters), and unfinished buildings.

The report says that the number of returnees increased significantly, largely due to the additional 35,500 individuals recorded as returning to Benghazi since the last report. Derna, Zawiyah, Gwalesh, Sebha, As Sidra and Kikla also saw large numbers of returnees in this reporting period.

The numbers of IDPs identified consequently decreased, especially in Benghazi, and also in Tobruk, Tripoli, Zawiyah and Derna. Damaged and destroyed infrastructure and delays in repair, insufficient security, and the presence of explosive remnants of war (ERW) continue to be the main challenges impeding IDPs from returning to their homes.

The number of migrants identified in Libya has remained relatively stable, increasing by 5 per cent since the last report. Seventy-nine per cent of migrants are reported to be residing in private shelter types, 18 per cent in public places such as gathering points, unfinished buildings, tents, caravans and makeshift shelters, and approximately two per cent are reported to be in detention centres around the country. The most frequently reported countries of origin for migrants are Niger, Egypt, and Chad.

Meanwhile, the report says that the Libyan conflict has severely disrupted schooling and made it more difficult for to access specialized programmes that are inclusive of children with disabilities. In Benghazi, the UNICEF supported Catch-up Classes programme enabled 30 children with disabilities to enrol in the programme in Benghazi between the months of September 2015 and January 2016.

The report says that according to recent data from education authorities, 558 schools across various regions of Libya are classed as non-functional, affecting approximately 279,000 school-age children.

It provides opportunities for students with disabilities to learn alongside other children who have not been able to attend school because of conflict and displacement. Through the programme, students are given the opportunity to complete what they have missed in the curriculum in a condensed manner, after which they return to regular schooling to continue their education with their peers.

Benghazi hosts more internally displaced persons (IDPs) than any other city in Libya and also happens to be the city from which the largest numbers of IDPs originate. Mass displacement into and out of Benghazi has stripped many families of the basics they need to run their households.

As a result, the UN Refugee Agency (UNHCR) has embarked on a major distribution programme to provide vulnerable families with essential non-food items (NFIs) through its local partner LibAid.

From its IDP database, LibAid selected the families most in need based on defined vulnerability criteria. They prioritized large families, families with female heads of household, and families hosted in schools or camps.

In mid-July, enough blankets, solar lamps, jerry cans and kitchen sets arrived in Benghazi to meet the needs of 500 families composed of 4,250 people. LibAid used SMS to contact the families, setting a precise collection date for them to visit the distribution centre. An average of 50 families per day passed through the centre, with distribution completed on 11 August.

The report also warns that the World Food Programme’s work in Libya risks severe disruption due to underfunding. At the time of publication, the WFP had received only 42 per cent of its funding requirements for 2016, the UN warned.

These funds have been used to procure and distribute food, but in August WFP had to adjust its planning figures based on the resources available and scale down its targeted number of people reached from 190,000 to 120,000. Despite this, WFP continues to provide life-saving food assistance, reaching 113,500 people in need in June and 79,820 in July, the UN reported.