IS remains deadly in its Sirte death throws 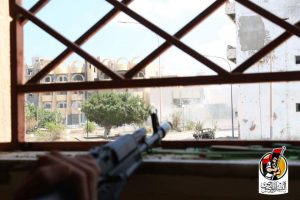 A view from the Sirte frontline today (Photo: BM)

The outcome of the battle for Sirte is not in doubt but IS is proving no less deadly in its death throws. Ten Bunyan Marsous fighters died today in a renewed assault on the terrorists’ remaining positions.  At least 30, one report puts the figure as high as 70, other fighters were injured.

The terrorists are still resorting to the much-feared car bombs but one attempt today was blown up by ground fire before it could reach its target. Snipers and booby traps continue to reap a grim harvest of dead and injured. Among the slain today was the oldest fighter in the BM ranks, Ali Edaib, aged 80.

The death toll among the largely Misratan attackers is now approaching 500.

The fighting today was in the town’s Number One district with some mopping up in the Third district. Both are largely residential.

The BM media office said that the bodies of ten terrorists had been found in a school. It is not clear how they were killed.

In what must be a disturbing development for BM commanders, last night a roadside IED on the highway between Misrata and Sirte, destroyed a passing BM vehicle and killed two of the occupants.