Libya’s prison and detention system is in chaos: report 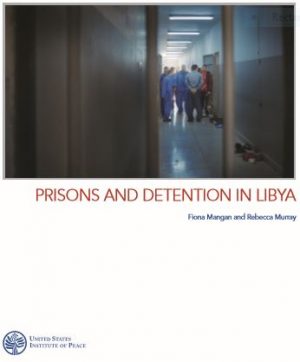 Libya’s prisons and its detention system is in chaos, and earlier hopes for reform have faltered, a United States Institute of Peace (USIP) report authored by Fiona Mangan and Rebecca Murray published Friday says.

The report combines and compares the findings of the two assessments, discussing the broader context of detention issues in Libya, with analysis centering on prisons under the authority of the Ministry of Justice and operated by the Judicial Police.

The report concludes that the turmoil of the 2011 revolution and the subsequent emergence of two governments have created a splintered system struggling to cope with structural, security, and budgetary challenges.

Prisons are run not only by different branches of the rival governments but also by politically aligned armed groups outside the state’s purview, it reports.

State-run facilities often rely on armed groups to help guard against attacks on prisons and on convoys transporting inmates to and from courts and hospitals.

The USIP says that its assessment teams visited about twenty facilities in different parts of the country in 2012 and again in 2015–16, interviewing prison officials, government officials, human rights activists, and other national and international actors.

The teams found prison directors trying to improve the well-being of both staff and inmates but struggling with scant resources, dilapidated facilities, and multiple security threats.

It says staff must contend with unreliable salary payment, uncertain chains of command, and little training. It also says that the integration of members of revolutionary armed groups into the Judicial Police has been slow and complex.

It reports that most prisoners are detained without being prosecuted or sentenced—mired within a stalled judicial process.

In Libya’s post-conflict environment, the report says, guards may see prisoners not just as detainees but as “enemies,” and vice versa, exacerbating problems of prison management. Moreover, many inmates are not “ordinary” criminals but conflict-related or political detainees.

Inmates typically live in overcrowded facilities, a number of them not originally designed as prisons and consequently unable to provide adequate sanitation, exercise facilities, and medical services.

A variety of reforms to the prisons and detention system are urgently needed, ranging from major legislative reforms—such as rewriting the law that governs the system—to bureaucratic measures—such as improving reporting procedures to facilitate strategic data-driven prison system management, the report says.

In spite of challenges posed by ongoing conflict, prison directors must take responsibility for improvements to prisoner care within their reach. Nonetheless, prospects for deeper institutional reform depend on local and international actors helping prison officials holding the system together until political stability can be restored and detention regularized, concludes the report.