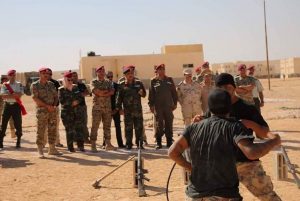 The Chief of Staff, Major-General Abdul Razzaq Al-Nadhuri, was in Jordan today to attend a Saiqa special forces graduation as well as sign a training agreement between the Libyan National Army and the Jordanian armed forces.

The agreement was first discussed last April when General Khalifa Hafter, the head of the armed forces appointed by the House of Representatives, was in the Jordanian capital for talks on cooperation. This was then followed by a memorandum of understanding, when he again visited Amman four months later.

The agreement is expected to result in the Jordanian military training Libyan soldiers in Libya as well as in Jordan. In fact, many Libyans are already being trained in Jordan including those who graduated today as commandos and parachutists. Others trained in Jordan have included aircraft engineers.