The battle for Sirte continues 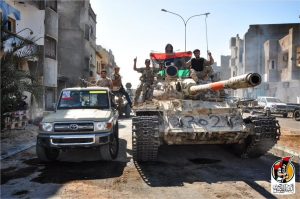 At least seven terrorists have died in the last 24 hours while the Bunyan Marsous operations room has not reported any casualties among its fighters. The bodies of the dead IS men were discovered near the Wahda Bank, a sniper position overrun by BM yesterday.

Today the civil court  was among positions taken from the terrorists.

As buildings are cleared of any booby traps, they have been searched. Among the finds has been a cache of documents detailing payments to fighters, most of them apparently non-Libyans, including Egyptians, Sudanese, Senegalese and Tunisian.  Within them is a receipt for LD 300 paid by a Sudanese man, apparently for an abducted woman.

Besides caches of explosives, shells and light ammunition, some of the terrorists’ personal effects are also coming to light. These included family photographs and letters of Abu-Malek Al-Masry who was killed last week in the fighting that took the town’s Second District.

BM fighters, all now displaying a bright red identification flash on their clothing,  have continued laying down fusillades of fire, shelling the remaining IS positions with tanks, anti-aircraft guns and RPGs. While some fighters persist in using daredevil tactics in open spaces, experienced BM snipers are seeking to suppress terrorist snipers who have claimed a regular toll among their attackers.

Bomb-disposal teams are meanwhile continuing to deal with booby-traps and mines, another major source of BM casualties. Over ten tonnes of collected explosives were detonated outside the town on Sunday in a huge blast that produced a plume of debris around  .