Tunisia fears return of its terrorist nationals once Sirte has fallen 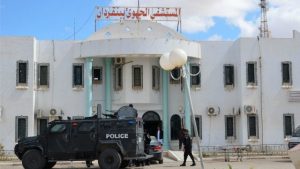 The aftermath of the March IS terror assault on Ben Guerdane (Photo: social media)

The Tunisian government is increasingly concerned at the potential return of hundreds of its nationals who have been fighting with IS in Libya. Its fear that has been echoed by French defence minister Jean-Yves Le Drian.

His Tunisian opposite number Farhat Horchani, in Paris yesterday for a security conference, said that these terrorists were a threat to their homeland. However Horchani dismissed estimates that there were up to 3,000 Tunisian militants in Libya, insisting the figure was nearer a thousand and that some of them held dual French nationality.

He bemoaned what he said was the lack of a regional plan to deal with foreign fighters and noted that Libya’s neighbours were handling the terror menace on a day-by-day basis. Le Drian said on Tuesday that while a coordinated strategy among Libya’s neighbours was essential to stop terrorist movements, he doubted it was politically practical.

“The war against terrorism is an all-encompassing one, “ said Horchani, according to AFP, “If we confront terrorism only on the security or military fronts, we lose the war.

“We must instil in young people that Islam is not this… If not, within a couple years we will have a monster more dangerous than Daesh,” he said.

Meanwhile an official at the main Tunisian trade union, UGTT has  warned that continuing anti-government unrest in the border town of Ben Guerdane could lead to a repeat of this March’s terrorist infiltration which led to three days of fighting in which 53 lives were lost.

According to Tunisialive, UGTT Secretary General Houcine Abbass has warned Ben Guerdane residents to demonstrate peacefully and pointed out the town’s vulnerability to a further attack by IS.