Brega Petroleum has assured the Libyan public of the ample availability of petrol despite petrol queues caused by rumours of shortages (Logo: Brega).

Libya’s Brega Petroleum Marketing Company has assured the public of the ample availability of petrol supplies. The statement came yesterday in response to the sudden reappearance of petrol queues.

Brega, is the marketing arm of the National Oil Corporation (NOC) for fuels and oils.

Brega said that the queues are stoked by groundless rumours. Long queues suddenly started to appear at all of Tripoli’s petrol stations Tuesday and in a number of towns and cities in Greater Tripoli and Western Libya.

Brega said that 80 million litres are being delivered to petrol stations and Tripoli’s main fuel depot which would be working around the clock. Moreover, it said that at least ten petrol stations would be operating on a 24-hour basis up to Monday and the start of the Eid break.

The Petroleum Facilities Guards for their part posted a photo of the fuel tanker Anwar Libya docked in Tripoli port purported to be loaded with 25 million litres of petrol for distribution to petrol stations and Tripoli’s fuel depot. 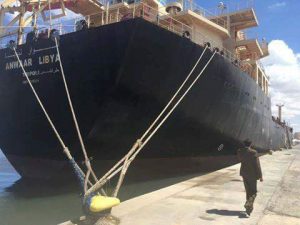 The PFG reported that the Anwar Libya fuel tanker was docked in Tripoli port laden with 25 million litres of petrol (Photo: PFG).

The petrol supply company warned that petrol stations that shut down over the holiday would be sanctioned.

Analysts put the sudden inexplicable petrol queues down to public fears of petrol shortages over the forthcoming Eid-al-Adha (feast of sacrifice) three-day holiday when many Tripolitanians drive out to their tribal homelands.

Brega called on the public to ‘‘avoid listening to rumours and false news that incite divisiveness’’.

Libya has not had any real petrol shortages for over a year. However, both the phenomenon of queuing and rumours reflects the psyche of a Libyan public under severe stress. The public have had to cope with power cuts, water cuts, internet cuts, cash shortages, bread shortages, medicine shortages, late payment of salaries, insecurity, kidnappings, queues for and shortages of new passports etc.

These shortages have, on the whole, continued despite the arrival of the Faiez Serraj-led Presidency Council/Government of National Accord in Tripoli on 30 March this year.