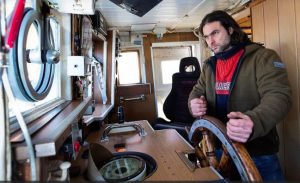 The Libya coastguard has arrested a speedboat belong to a German charity that boasts it has rescued almost 4,000 migrants

The 11.5 metre-long RIB, belongs to the Sea-Eye organisation and is called Speedy. It was reportedly spotted off Zawia by a coastguard vessel. When ordered to stop, the craft, which is capable of 45 knots, attempted to flee but stopped when the coastguard fired a warning shot. Two crew members, both German were arrested. The coastguard said the speedboat had come from Tunisia.

The mother ship Sea-Eye, a Dutch-flagged former East German trawler which is almost 60 years old, was today heading towards Libya from Malta. It had been delayed there awaiting a spare part. The Sea-Eye web site says the vessel carries 1,500 litres of bottled water, 700 life vests and life rafts for up to 500 people.

It further states that in ten missions over the last four months, the charity has rescued “ an almost unbelievable” 3,883 people.

The charity’s founder Michael Buschheur declined to comment when the Libya Herald contacted him at his home in Regensburg, Bavaria, “I have nothing to say at this time”, he insisted, “Contact me in a week”.

The charity’s web site reported on 6 August that the Speedy had just conducted a test run from the Tunisian port of Zarzis. Under the “leadership” of Prof Tilman Mischkowsky it had done “quick intervention trips to the relevant area off the Libyan coast”. With a normal crew of four, the RIB had also rendezvoused with the Sea-Eye.

Yesterday almost 2,000 migrants were rescued from 36 vessels. The operations of five NGOs (of which Sea-Eye was not one) were coordinated by the Ireland’s LÉ James Joyce which itself took on board 423 migrant in an operation 40 miles northwest of Tripoli.