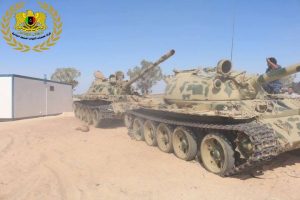 In a lighting strike this morning, the Libyan National Army (LNA) has taken control of the neighbouring Sidra and Ras Lanuf oil terminal towns from the central region Petroleum Facilities Guards (PFG) headed by Ibrahim Jedhran. LNA forces also took the south and east gates at Ajdabiya. In Zueitina, however, where the PFG has been in control of the oil terminal, there was still fighting between the two sides, Colonel Ahmed Al-Mismari, the LNA spokesman, said this morning.

“We got to Sidra and Ras Lanuf without almost any resistance”, he told the Libya Herald, although one member of the PFG had been killed and an empty oil tank had been set on fire by them. There had been no LNA casualties. They fled, leaving all their weapons, he added. These included three tanks, two armoured vehicles as well as other vehicles, mortars and Kalashnikovs.

However, while PFG spokesman Ali Al-Hassi admitted that there had been clashes this morning, he has denied that the LNA had taken Sidra and Ras Lanuf. 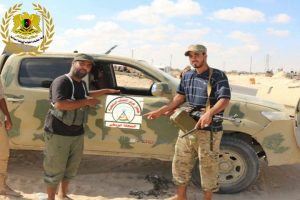 One of the vehicles left behind by the PFG (Photo: LNA)

The appropriately named Operation Al-Barq Al-Khatif (“Sudden Lightning”) was launched at 5 am this morning, Mismari explained, and had been planned well in advance. “We worked on it. It was not a sudden move,” he said. The operation had consisted of four separate advances, he explained, all of them under the direct control of General Khalifa Hafter. He would not give numbers involved but said that the attacking forces had been “very large”.

He added that air strikes west of Ajdabiya were still taking place, and that the road between Ajdabiya and Benghazi would remain closed until further notice.

The head of Magharba tribe in Ajdabiya, Salah Al-Atewish, has meanwhile called on all members to support the LNA.

Ras Lanuf and Sidra include not only the terminals but also a 220,000-b/d refinery, a petrochemical complex, a military and a civil airport and oil company buildings but are also home to some 25,000 people.

In a separate development, Mismari also divulged that there has been further fighting in Benghazi’s Ganfuda district today, including a number of air strikes.