Sirte battle pauses as IS feared in rear areas 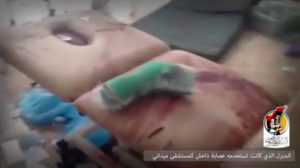 A blood-stained massage couch in the IS field hospital (Photo: BM)

The beard shavings and discarded IS costumes discovered in recent weeks by triumphant Bunyan Marsous fighters were not necessarily left by terrorists fleeing for their lives. There are grounds to believe that as BM’s grip on Sirte tightened, an unknown number of fighters slipped away to regroup away from the town,

In addition, it has long been suspected that the April IS attack on Abu Grain, just outside Misrata, was more than a pre-emptive strike at the largely Misratan BM forces gathering to advance towards Sirte.

The position was retaken from IS after almost three weeks.  The concern is that the terrorists may have used their control of the key crossroads to evacuate men and weapons including, it is suspected, some of their senior people.

There have been at least three terrorist attacks on the supply route between Misrata and Sirte in the last two weeks. This has obliged BM commanders to restrict traffic movements to daylight hours and to set up a series of extra check points.

BM spokesman Mohammed Al-Ghasri has said that fears that not all terrorists have been cleared from behind the front line in Sirte has also forced a closer sweep of areas taken from IS. This, he admitted, was delaying the final advance.

Yesterday BM reported that it had found an IS field hospital in a three-storey house. It published footage including a bloodstained massage couch and drugs and equipment that appeared to have been looted from the Ibn Sina hospital. Boxes of medication, dressings and syringes were strewn around the rooms where the terrorists had been treating their wounded. It was unclear if any dead or injured IS had been found there.