Sanalla promises exports to resume “immediately” at Zueitina, promises oil production can rise to 600,000 b/d within a month 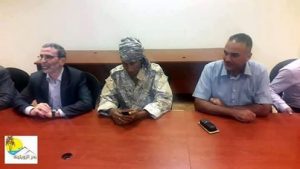 Exports from Zueitina oil terminal are to recommence “immediately”, Mustafa Sanalla, the chairman of the reunited National Oil Corporation (NOC) said today, announcing plans to lift force majeure at the port. It will, however, take a little longer at Ras Lanuf and Sidra because of repair work needed at both places, he said.

He was speaking in Zueitina which he was visiting to assess the situation at the three oil terminals. They were taken at the beginning of the week by the Libyan National Army led by General Khalifa Hafter from the Petroleum Facilities Guard loyal to Ibrahim Jahdran.

In a statement last night that technical teams had already started assessing what needed to be done to lift force majeure and restart exports, Sanalla predicted that production could be raised from around 290,000 b/d at present to 600,000 b/d within four weeks and to 950,000 b/d by the end of the year.

“However, this is dependent on receiving essential funds from the budget and on the Oil Crescent ports and the closed pipelines in the southwest being opened and kept open,” he said.

“We welcome statements from the Libyan National Army allied with House of Representatives (HoR) and the president of the HoR, Ageela Saleh, that the ports should be placed under NOC’s control,” he also added.

Last month, the NOC started shipping 620,000 barrels of oil from the storage tanks in Zueitina to Zawia for protection after fears that there would be fighting there between the LNA and PFG.

The move was made with the approval of the HoR and the LNA both of which have said since Sunday’s takeover that the terminals would be handed over to the reunited NOC.

In last night’s statement, Sanalla said that he hoped the reopening of the terminals marked “the beginning of a new phase of cooperation and coexistence between Libya’s factions, as well as an end to the use of the blockade as a political tactic”.

Libyans, he said, had “a common interest in keeping our oil flowing. By raising oil production and exports we can reduce our budget deficit and pay for vital services.”