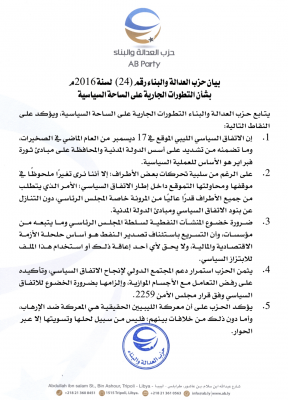 In the latest response to the Libyan National Army’s takeover of the eastern oil crescent terminals, the Muslim Brotherhood’s Justice and Construction party (J&C) has warned that it will trigger counter attacks. Without mentioning the LNA by name, a J&C statement this afternoon said that the use the force by certain sides in Libya in order to impose a new reality would be resisted.

In its statement, the party said that all strategic locations and institutions had to be under the authority of the Government of National Accord (GNA), and that included the Petroleum Facilities Guards (PFG).

Reaffirming its view that the Libyan Political Agreement remained the sole basis for any political progress in the country and rejecting any attempt to impose military rule in Libya, the J&C however called on Presidency Council (PC) members to bring some order to their proceedings.

The LNA takeover of the oil terminals has caused a deep split within the PC. There have been conflicting statements about it from various members and Serraj is said to under pressure from both sides. A source close to PC member Ali Gatrani told the Libya Herald that Serraj phoned Gatrani calling him to an urgent meeting to agree a joint response, suggesting that if they failed all PC members should resign.

It followed a statement issued jointly by Gatrani and Fathi Majbri, both from the east, hailing the takeover of the terminals. In contrast, Musa Koni, who was acting chairman of the PC until today, issued a condemnation of it. It was condemned too by fellow members Abdelsalam Kajman and Mohamed Ammari

Ahmed Maitig, during an interview with LANA two days ago has showed himself to be changing sides, however, holding out an olive branch to the east of the coutry and noting that “our brothers in the east have been attacked unfairly for a long time . . . but they have proved devotion and their love of Libya and its sovereignty,” he said.