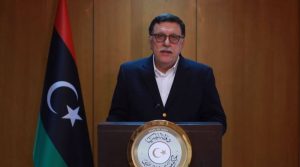 Faiez Serraj the head of Presidency Council (PC) has arrived in Cairo for a series of meeting the most important of which will be with the president of the House of Representatives, Ageela Saleh, for discussions over the proposed list of members of the new Government of National Accord (GNA).

Egypt is seen as the key to persuading Khalifa Hafter to work with the Presidency Council rather than his present policy of constantly opposing it.

Hafter is said to also have been invited to meet Serraj in Cairo but so far has not responded.

Sources claim that UN Envoy Martin Kobler will also be in the Egyptian capital on Saturday to give his support to the Serraj-Saleh discussions.

Today, Thursday, Kobler was in Misrata and met numerous key payers from the city including the municipal council, its members of the House of Representatives (HoR) and the head of the State Council, Abdulrahman Sewehli, apparently to ensure their support for the Cairo meetings.