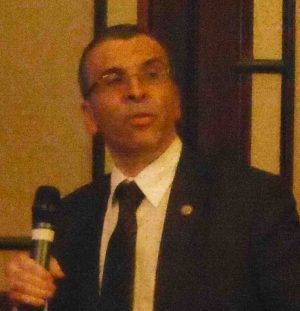 Seeking to capitalise on the removal from Petroleum Facilities Guard control of the eastern oil export terminals, National Oil Corporation chairman Mustafa Sanalla has demanded other PFG units end their blockade of a western pipeline.

“The events in the Oil Crescent must have made it clear to everybody that the use of blockade as a tactic in our politics is a dead end,” said  Sanalla, adding. “The blockade by the southern PFG has cost Libyan people all over the country food, schoolbooks, medicines, salaries, and electricity, and it has achieved nothing”. He said that the production stoppage had cost Libya ore than $27 billion in lost revenues.

Sanalla wants the reopening of the pipelines at Reyayna which link the Sharara and El Fil fields in the south-west with respectively the Zawia refinery and the Mellitah gas-processing complex to the west of Tripoli. The line from the Sharara wells has been shut down for almost two years.  The El Fil pipeline was shut down in April last year.

Sanalla said that if the blockade was lifted immediately NOC could bring on stream 125,000 b/d before the end of the year, boosting it to 350,000 b/d by the middle of next year.

“Nationally, we can have oil production back up to 600,000 b/d within a month, 900,000 b/d by the end of the year, and 1.2 million b/d within twelve months” he said, “But for that to happen, we need the pipelines at Reyayna to be unblocked by the southern PFG”.

These figures however, he said could only be achieved if the Presidency Council released “essential budgeted funds”. Since it keeps none of the proceeds of oil sales, which go straight to the Central Bank, the NOC has long been beholden to governments to fund it. This has often led to chronic cash shortages. Under Qaddafi, the state oil firm even defaulted on loan repayments because if could not persuade the finance ministry to hand over any money.

Sanalla clearly believes that unless NOC is given enough money to repair and maintain not just the Sharara and El Fil pipelines but the company’s entire infrastructure, not least the combat-damaged export terminals at Sidra and Ras Lanuf, it will not meet these production goals.

“There is a growing consensus, ” said Sanalla, “that our oil can be a force for unity. It is the only resource available to us to finance our reconstruction. Instead of hurting each other, we should be cooperating to generate as much revenue as we can for the benefit of all Libyans. It is time to let Libya’s oil flow freely and get Libya back on its feet.”

This afternoon, the tanker Seadelta, which had broken off loading at Ras Lauf yesterday when Jadhran’s PFG launched an abortive counterattack against the army, returned to the loading jetty where, a port official told Reuters, another tanker, the Syra was also due to start lifting  cargo. Yesterday another tanker left Brega with 600,000 tons of crude.