State Council announces HoR does not exist, says it will take over legislative powers 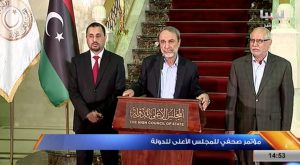 The State Council has declared what is calls the “non-existance” of the House of Representatives (HoR) as envisaged by the Libyan Political Agreement (LPA). As a result, it says, it will take over full legislative authority until the HoR succeeds in holding a quorate session.

According to State Council’s second deputy president, Mohamed Mazaib, the State Council was obliged to take the action because the HoR’s president, Ageela Saleh, has been helping the military to take power in Libya.

A military takeover, he said, had become clear with Khalifa Hafter’s Libyan National Army replacing elected mayors by military officials. As a result the State Council was compelled to assume legislative power.

Speaking at a press conference at the State Council’s offices opposite the Rixos Hotel, Mazaib, accompanied by the Council’s president Abdulrahman Sewehli and first deputy president Saleh Makhzoum, also claimed the refusal of the HoR to approve the Government of National Accord (GNA), had resulted in Libyan citizens suffering from serious economic hardship and a complete lack of security.

For his part, Sewehli, while insisting that the LPA presented the only viable solution to the Libyan crisis and that everyone must adhere to it, called on Libyans to close ranks and resist the military’s attempted coup. Libya’s western allies, he said, also had a role in ensuring that “some countries” are prevented from interfering in Libya’s affairs.

At the same time, however, he said the Council was determined to prevent any deterioration of the security situation in Tripoli. He also rejected any attempt by the HoR to change any part of the LPA.

In recent days, the HoR’s military governor for Cyrenaica, Major-General Abdul Razzaq Al-Nazhuri has sacked four mayors and replaced them with military figures. However, despite the State Council’s claims, no article of the LBA in fact authorises the State Council to assume the HoR’s powers.

The Statement by the High Council of State issued in Tripoli today, September 21st, 2016

The High Council of State declares the following: