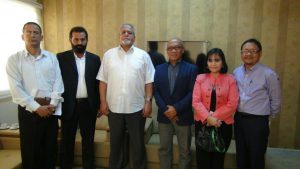 Ahmed Al-Oraibi, appointed last month by Major-General Abdul Razzaq Al-Nazhuri as acting mayor of Benghazi, has called on the Philippines to reopen its consulate in the city. It was closed more than two years ago.

Oraibi made the call during a meeting at the municipal offices on Saturday evening with a member of the Philippines embassy, Camaloden Guro, who is visiting Benghazi to consult with members of the community and carry out a number of consular activities. Also attending was Doris Battard, the Filipina nurse and community leader who has worked in Benghazi for 23 years.

Thanking Filipinos for remaining at work in the city despite the situation, Oraibi was nonetheless told of the many difficulties faced by them not least the lack of funds.

Oraibi’s call call comes a week after the Philippines foreign ministry lifted it mandatory order to all Filipinos to leave Libya. The Philippines’ Crisis Alert Level for Libya has been downgraded from 4 (mandatory repatriation/evacuation) to 2 (restriction phase), enabling those who left but with existing work contracts to return. However, it remains illegal for Filipinos to accept new work contracts in Libya and travel there.

The decision to downgrade the crisis alert follows a visit to Tripoli by an assessment team from Manila last month. Under Level 2, Filipinos are called on to restrict non-essential movements, avoid public places, and be prepared to leave in necessary.