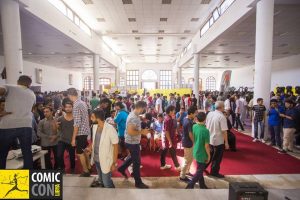 The first ever Comic Convention was held in Tripoli over three days (Photo: Comic Con Libya).

The event was held at the Tripoli International Fairgrounds (TIF) in the Libyan capital, Tripoli. 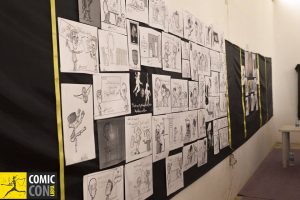 Thousands attended the very successful event with organizers reporting that at the end of the second day 7,000 tickets had been sold. They estimate that as many as 20,000 could turn up over the three days.

They are mostly students studying electrical engineering, medicine art and computing with a number having to hold down jobs while studying, including a graphic designer and an English teacher.

Asked by Libya Herald how the idea of holding the event came about, one of the organizers, student and English teacher, Hisham Aref, said that it came about through ‘’brainstorming’’. 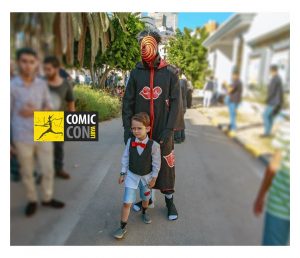 Cosplay or costume play, the practice of dressing up as a character from a film, book or video game, was one of the forms of art on display (Photo: Comic Con Libya).

‘‘It was just a brainstorming session between a group of friends who were discussing drawing, comics and gaming’’.

Organizing such a novel event in Tripoli would not have been easy at a time when the whole country was still dealing with its post 2011 revolution fallout. Asked about the challenges they faced as organizers, Aref said that ‘‘It’s the same difficulties anyone would face with an unprecedented idea. People were reluctant to sponsor. A new idea in these times in Libya is very difficult to pitch’’, he added.

‘‘Nevertheless’’, Aref stressed, ‘‘we got a lot of help from very generous donors who wanted to make it happen. ‘‘The Arete Foundation for Arts and Culture was our main sponsor. And official support came from many parts of the Libyan public and private sector. The Ministry of Culture was very cooperative with us and offered permission to host the event at TIF’’. 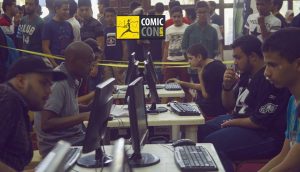 ‘‘Tripoli Municipality helped provide a wide variety of locations before we settled on TIF. We also got a lot of help and instructions from the Art House’’, explained Aref.

The event received wide coverage on social media as well as coverage by Libyan TV stations and was seen as a welcomed positive distraction to Libya’s youth: away from polarized politics, shortages, everyday struggles of life as well as militia fighting.

The event was seen as an effort to highlight and encourage various artistic skills associated with makeup, cosplay, cartoon, and digital art.