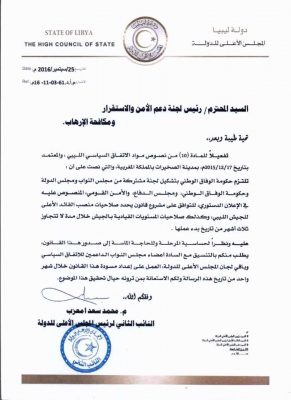 Ignoring national and international rejection of the its unilateral assumption of legislative powers, the High State Council has announced that it plans to appoint top military and civilian positions, including the heads of the armed forces and the governor of Central Bank of Libya (CBL).

The Council’s second deputy president, Mohammed Mazaib, has told its Counter-Terrorism, Security and Stability Committee to prepare a law within a month on powers of the Supreme Commander of the Libyan Army and other leading army positions. He has also instructed the Political Agreement Implementation Committee to make nominations for the governorship of the CBL, the chairmanships of the Audit Bureau, Administrative Control Authority, Anti-Corruption Authority and the High National Elections Commission, as well as the presidency of the Supreme Court and the post of Attorney General.

The move to appoint the civil posts has been triggered by the view that the appointment of Saddek Elkaber as governor of the CBL expires tomorrow, 26 September. He was appointed by the former General National Congress in 2012.

The name of one of the deputy governors, Tarik Youssef, is currently being widely suggested on social media as having already been selected to succeed Elkaber. But the latter not expected to go quietly.