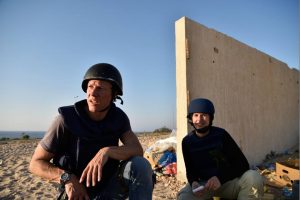 Bunyan Marsous (BM) said this evening that as many as 55 terrorists had been killed today in Sirte, for the lost of eight of their own men and 57 wounded, A Dutch photojournalist was also killed reportedly shot through the chest by a Islamic State (IS) sniper.

After ten early morning airstrikes by aircraft from Misrata, Bunyan Marsous forces again sought to press forward into the shrinking IS enclave in Sirte’s Third District. Many of the terrorists appear to have died in a breakout or counterattack toward the port. BM also said it forces were searching for another IS group trying to make their escape.

The shot Dutch photographer, Jeroen Oerlemans, was taken from the Sirte frontline to Misrata hospital where doctors pronounced him dead. The second journalist to perish in the fight for the town and one of two Dutch journalists there, he was killed in an area supposedly freed of IS forces.

In July, TV reporter Abdulgader Fassouk was shot by a sniper as he ran across open ground.  Oerlemans was an experienced photographer who was briefly kidnapped by IS in Syria four years ago

BM said this evening that it had been told by captured terrorists where civilians were sheltering. It said that its artillery bombardment had avoided houses where families might be.