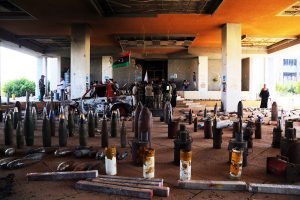 Part of the cleared explosives from Benghazi university (Photo: army)

Even though the last terrorists were pushed out months ago, Benghazi university campus remains far too dangerous for anyone to think of the students returning.  Army de-mining teams reckon that they have cleared only five percent of booby traps. With the limited equipment they have, it could take months before the job is done.

With the exception of the Arts Faculty, destroyed in a blaze which the army says the terrorists started deliberately with explosives and gas cannisters, much of the rambling campus in Gwarsha has suffered only limited damage. But buildings and the grounds have been strewn with mines and improvised explosive devices.

The  de-mining teams under General Fathi Al-Sanfaz have built up a collection of defused artillery and mortar shells which terrorists set up to go off when doors were opened or flooring walked on. A similar level of ingenuity and presumably training is evident in Sirte, where there have been reports of booby traps disguised as rocks or linked by fishing wire to children’s bicycles.

Some IEDs in Benghazi university have been found set up for a chain of explosions. There are also conventional anti-personnel and vehicle mines.

Sanfaz complains that his men lack advanced equipment to detect concealed explosives. They  are also short of protective gear.  Five of his soldiers have died in blasts so far this year and one of his engineers, who is still part of the unit, lost an eye when a device went off near him.

When the engineers first moved in to check the campus, they found taped corridors which they assumed had been left by the terrorists. But even these apparent safe routes are not taken for granted.  With only limited detection equipment, progress is often only made by probing the ground with knives and lifting the explosives with their bare hands.

Sanfaz says that the international community needs to do more to help his men complete their dangerous work.