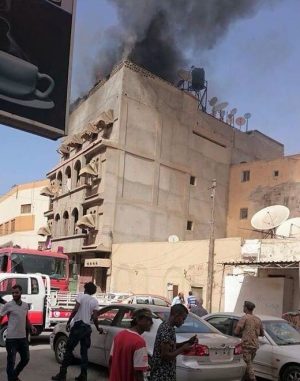 Smoke from one of the buildings hit by BRSC mortars (Photo: Social media)

Five people were killed today when two buildings in Benghazi’s Sidi Hussein district were shelled today, one of them the army’s financial administration building, the other a nearby apartment block not far from the former Tibesti hotel.

Sixteen other people were injured in the terrorist attack, 12 of whom were rushed to the city’s Jalaa Hospital. Of these two are said to be in a critically condition. Most of the others suffered minor injuries and were allowed home.

Of the five killed, two are Egyptians, two Libyans, and one a Sudanese. One of the Libyans has been named as Ahmed Al-Awami, the imam at the mosque in administration building and said to be “elderly”. The other Libyan who died has been named as Saleh Nagaz.

The son of one of those wounded told the Libya Herald his father was outside their apartment building at the time and had subsequently explained to him that that he had seen two of the neighbours killed as they sheltered in a doorway at the time.  The son added that nine neighbours had been injured. 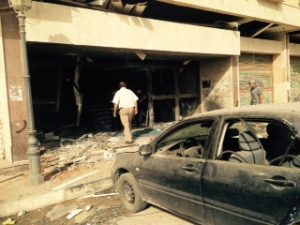 Damage to the front of the apartment block (Photo: Libya Herald)

The shelling is believed to have been carried out by members of the Benghazi Revolutionaries Shoura Council and there are suggestions that it may have been in retaliation for air strikes by the LNA on Ganfouda.

Police have ordered people in nearby buildings to evacuate the area.