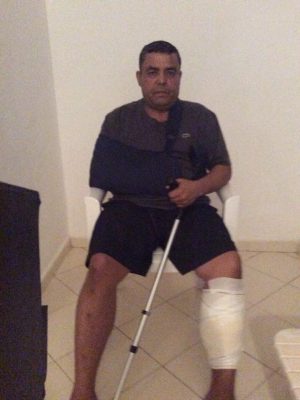 Family sources have confirmed to this newspaper that the Deputy General Manager of the Libyan Foreign Bank (LFB), Omar Yikhlif Hajaji, was released yesterday. Libya Herald delayed publication of any details of the release to allow the bank manager time to quickly leave the country.

Hajaji, who was in charge of banking operations at LFB, was kidnapped nine days ago by an armed gang in front of his house in the capital’s Gargaresh district last week.

He has now left Libya recovering from and receiving treatment for a leg wound received during his kidnapping.

Family sources confirmed to this newspaper that no ransom was paid and that Hajaji was ‘‘dropped off in one of the streets near his home’’. The source said the family still do not know the identity of the kidnappers. It is not clear if Hajaji will return to Libya or to his job at the LFB.

The Hajaji incident only goes to further highlight the chaos and insecurity that Tripoli finds itself in. The criminality and total breakdown in law and order and state institutions has become even worse since the 30 March arrival in Tripoli of the internationally-backed Serraj-led Presidency Council/Government of National Accord.

The PC/GNA seems to enjoy absolutely no authority and legitimacy within the capital, as it is totally unable to positively affect living conditions. Criminality, car-jackings and kidnappings have become the norm in Tripoli with anyone deemed to be wealthy or with a well-paying job liable to be kidnapped at any time.

Victims and their families have no legitimate state institutions to go to for help, and have to rely on their own efforts, any one of the many Tripoli-based militias, informal networks or tribal connections in order to seek their kidnapped relative.

The PC/GNA, having made the strategic move to depend on local militias to protect them and enable them to remain in the capital – seem to be held hostage by the militias that are in control of the capital. Beholden to them for their political survival, the PC/GNA, it seems are unwilling to attempt to implement any of the security sector reform promised in the UN-backed Libyan Political Agreement  signed in Morocco in December 2015.