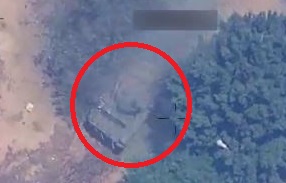 Footage of an air strikes on an IS tank in Sirte (Photo: US AFRICOM).

A Bunyan Marsous commander has rounded on the United States saying that its airstrikes in Sirte have been “useless” and that if Washington had really wanted to, it could have destroyed IS positions and liberated Sirte within a few hours.

The claim came today from Brigadier Ibrahim Beitelmal, the spokesman for Misrata’s military council. He said on Sheikh Sadeq Al-Ghariani’s Tanasah TV channel that America had the technology to end the terrorists’ resistance in a matter of hours, not months. He insisted that warplanes launched from Misrata were more effective than US aircraft in clearing the way for BM forces on the ground.

The US has now launched more than 200 strikes by fast jets, drones and helicopters, the majority believed to be from the amphibious assault ship USS Wasp.  Its operations began in August at the request of the Presidency Council. On Monday the Pentagon announced the strikes would continue for another month and indicated that it would now target IS terrorists elsewhere in Libya as well as in Sirte.

The US Africa Command (AFRICOM) has reported hitting tanks, truck bombs and terrorist strong points as it said it cleared the way for BM fighters to advance.

However, Beitelmal said that it was clear to everyone that the US wanted to prolong the battle for the town. He said that BM forces could have taken Sirte without American assistance but that the PC had insisted that the US be involved.

So far there has been no reaction to Beitelmal’s provocative statement from either the Americans nor the PC who are meeting in Tunis.

One diplomat wondered this evening if Beitelmal’s comments perhaps reflected the desperation among the largely Misratan BM commanders at the failure of their forces to crush the last terrorist resistance in Sirte’s coastal Third District.

In recent weeks, the assault has been resumed in fits and starts and each time more casualties have been added to the BM’s official toll of some 550 dead and 2,500 injured. However, medical sources suggested last month that the real figures were higher.

If the US airstrikes are indeed inaccurate, for whatever reason, as Beitelmal claimed, it does not appear that any BM fighters have been hit by mistake.