RADA arrests kidnap, extortion and robbery gang of 12 in Tripoli 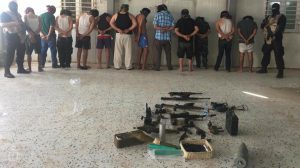 A gang of 12 suspected of kidnap, robbery and extortion were arrested by RADA last week in the Siyahiya area of Tripoli (Photo: RADA).

The Rada (Special Deterrence Force – SDF) revealed that it had arrested on Friday a gang of 12 that had been engaged in kidnapping, robbery and extortion.

The twelve were arrested in the Faw beach village next to the more well-known Regatta beach village at the Siyahiya-end of the long Girgarish road of Tripoli.

Rada reported that most of the gang were in a drunken state when arrested and that the FAW resort had recently become notorious for becoming a hideout for many criminals. They reported that they had received many complaints from residents in the area about the gang’s mistreatment of people and their ‘‘immoral behavior’’.

Rada said that after investigation it became clear that the gang was responsible for a lot of kidnapping in Tripoli and especially kidnappings that had taken place in the Hay Al-Andulous, Al-Siyahiya, Ghoat Al-Shaal and Siraj areas (western Tripoli).

The revelation comes just days after a high profile kidnap and subsequent release in Tripoli. Last week Libya Herald reported on the Deputy General Manager of the Libya Foreign Bank Omar Hajaji who had been shot in the leg and fled the country after his release. The Deputy GM, who was in charge of banking operations, had been kidnapped by an armed gang from in front of his Girgarish home.

Family sources had told this newspaper that no ransom was paid and that Hajaji was ‘‘dropped off in one of the streets near his home’’. The source had said that the family still did not know the identity of the kidnappers. It is not clear if Hajaji will return to Libya or to his job at the LFB.

Meanwhile, another Tripoli resident, ‘’*Ali’’ relayed to Libya Herald how he had been robbed and had his car stolen at gun point last week mid-morning on the motorway on his way to work.

‘’They were two guys armed with small guns and they were unmasked. I was on the motorway at around 10 am on my way back to the office during the work week. It was a car with blacked-out tinted windows but with its number plates still on’’.

He said that he was surprised that ‘‘no one was prepared to help him out’’ during the incident as other passers-by just watched and continued on their way.

‘’Tripoli is suffering big time. There is lots of armed robbery and kidnapping and other crime now in the city and especially in Girgarish. Under (Faiez) Serraj (President of the UN-brokered and internationally-backed Presidency Council and Government of National Accord) there has been no improvement at all’’, he added.

The Hajaji and Ali incidents further highlight the chaos and insecurity that Tripoli finds itself in. The criminality and total breakdown in law and order and breakdown in state institutions has, according to many Tripoli residents, become even worse since the 30 March arrival in Tripoli of the internationally-backed Serraj-led Presidency Council/Government of National Accord.

*Ali is not the real source’s name and is being used because security reasons and because the source insisted on total anonymity.