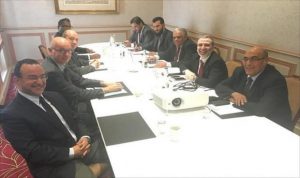 National Oil Corporation chairman Mustafa Sanallah said today that oil production had passed 554,000 bpd and was on track to hit the 900,000 bpd mark by the end of the year.

Sanallah has been in Paris where he had talks with the top managements of French oil firm Total and Italy’s ENI. While both these companies have offshore properties in Libya, in the wake of collapsing security, Total abandoned its onshore operations in 2013 and two years later took a $755 million write-down on its Libyan assets.

The irony was that Total had been the first international oil company to return to the Libyan market after the Revolution. The 2012 bombing of the French embassy in Tripoli came in the middle of the the capital’s oil and gas show which had been heavily sponsored by Total.

It would appear that Sanallah has been seeking to persuade Total to recommit to Libyan onshore exploration and production. Given the security risks still involved, key to a reengagement by foreign firms may well be a review of the current exploration-production sharing agreements (EPSAs) which some firms, such as Shell complained did not allow them a far return on their investment. Only Wintershall has enjoyed favourable EPSA terms.  The ESPAs were due to be reviewed on an industry-wide basis in 2014 but the Libya Dawn takeover in Tripoli halted such discussions.

Meanwhile the news agency LANA has reported NOC as saying that in the two years that production from the El-Fil (Elephant) field in western Libya has been halted by protestors Libya has lost $27 billion in oil sales. A valve on the pipeline at Reyayna was actually finally closed by Zintani members of the Petroleum Facilities Guard in April 2015.