Rump of GNC and Ghwell stage coup, declaring themselves back in power 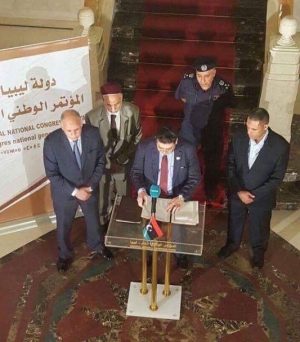 Khalifa Ghwell pronounces himself back in business as prime minister (Photo: Social media)

In a dramatic turn of events, a handful of members of the former General National Council and the former Tripoli “prime minister” have staged an apparent coup in Tripoli, taking over the the GNC’s old premises next to Tripoli’s Rixos Hotel and declaring themselves in power again.

This evening Ghwell issued a statement from the GNC’s old premises next to Tripoli’s Rixos Hotel, declaring a state of emergency and what he called it an “historical initiative to rescue Libya”.

The Rixos conference centre, which previously served as the GNC’s chamber, and the “Hospitality Palaces” across the road were taken over six months ago by the State Council headed by Abdulrahman Sewehli, but it pulled out a couple of days ago, citing security issues.

Today’s takeover followed a stand-off in the area since early morning between gunmen supporting the former GNC and those linked to Sewehli. It ended with the latter withdrawing. Disgruntled over unpaid salaries, their commitment was already weakened. It is believed they had already threatened to quit and were in contact with Ghwell supporters – which was why the State Council decided to withdraw.

This evening, Ghwell, accompanied by Awad Abdul Saddeq, the GNC’s first deputy president, and the former head of GNC’s own “presidential guard, Ali Ramali, called on Abdullah Al-Thinni, head of the interim government in Beida, to join him and together form a national unity government.

Ghwell also accused the internationally-backed Presidency Council (PC) of undermining national unity and of being the pawn of foreign forces wanting to divide the country.

He ordered all governmental organisations and ministries to stop dealing the PC and to work with him again instead. He also said that all those who had been appointed by the PC were dismissed.

There has been no reaction as yet to what is being seen as a coup, either by Sewehli, or by the Presidency Council which is meeting in Tunis. Also there has been no appearance so far of Nuri Abu Sahmin, the former head of the GNC.

There has been no comment either from Beida although it is known that a couple of weeks ago, proposals were put to the Thinni government that it should join hands with the former Ghwell administration and create a government of national unity to replace the PC.

It is thought that controversial grand mufti Sadek Al-Ghariani was aware of approved Ghwell’s moves. His Tanasah TV station was the only one attending Ghwell’s press conference this evening.