Anarchy as Tripoli militias fight after the Rixos coup 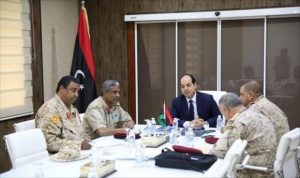 Tripoli has been descending into military anarchy over the last 48 hours although, extraordinarily, some parts of the city still appeared calm and normal this evening.

The two-day old Rixos coup by Khalifa Ghwell has triggered disparate outbreaks of fighting between rival militias in which one person is known to have been killed and several wounded.

The death was of a Tawerghan woman in the IDP camp in Fallah district by the Airport Road. Six other camp occupants were injured including a child whom some reports say has since died.

The Rixos is now surrounded by irregular, heavily armed units supporting Ghwell and whose vehicles carrying no markings and the gunmen wearing civilian clothing. Early this evening gunfire was heard in Bab Ben Gashir near the Rixos. Earlier shopkeepers in the area had shuttered their premises.

The Prime Ministry in Railway Road has been busy all day with Presidency Council head Faiez Serraj holding a series of meetings. His deputy Ahmed Maetig discussed the security situation with the commander of the new Presidential Guard, Colonel Najmi Al-Nakua.

Meanwhile, as militias move to reinforce with positions, Haithem Tajouri’s Tripoli Revolutionaries’ Brigade (TRB) has today expanded its network of checkpoints set up immediately after the Rixos coup. These include Sidi Al-Masri, Ain Zara and the city centre around Martyrs’ Square into which armoured vehicles have been moved. Last night, Tajouri’s men ordered shops the square to close.

“Tajouri’s men are everywhere,” one local resident observed this afternoon.

There are unconfirmed reports, though that in the growing chaos in the city, they too are fighting among themselves, with two TRB units clashing in Zawiat Al-Dahmani. However, it is also being said that fight was in fact between the TRB’s 6th unit and a neighbourhood family. Local residents said that the TRB had burnt down a house yesterday and that the owners, said to be part of a local militia, retaliated by attacking the 6th unit’s base in the district.

Elsewhere, to the south of the capital there was fighting near Qasr Ben Gashir between armed men said to be from Wirshefana and Tarhouna.

Last night there was also heavy firing from what locals said were light and medium weapons near Busetta which caused some injuries.  This fighting erupted again early this evening but it is still unclear who is fighting who and why.

However, despite the noise of gunfire from various parts of the city Tripoli has been getting on with life cautiously. The Libya Herald spoke to a member of staff at Tripoli university who explained there had been clashes nearby today. “It was a little dicey,” he said. However, driving through Zenata, Suq Al-Juma and Busetta “I did not see anything.  People were going about their business as normal”.  The university has not announced that classes will be cancelled tomorrow.