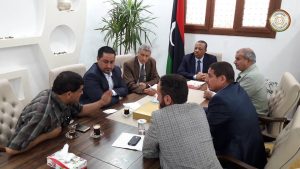 Outwardly appearing to look favourably on the call, he nonetheless said that Ghwell had to accept the House of Representatives as Libya’s sole legitimate legislature.

Ghwell first made the call on Friday evening when he announced his coup at the Rixos complex which served as the parliament building for the former General National Congress and since Spring as the headquarters of the State Council. Today he told Arabiya’s Al Hadath TV station that he had subsequently phoned Thinni, but did not disclose details about the conversation.

It would be impossible for Ghwell to accept Thinni’s demand. Friday’s attempted coup was primarily the work of a handful of former General National Congress members who had not become members of the State Council attempting to resurrect themselves as the country’s parliament. Ghwell is not in a position to ditch them, nor, given his record, is he likely to have any sympathy for the HoR.

Nonethess, in a statement today, the Thinni government suggested that the HoR investigate Ghwell’s offer. “We as an interim government have made many efforts to reflect the views of Libyans and find an end to people’s suffering” it added.

It also expressed its concerns about the situation in the capital saying that the attempted coup was indicative of the “chaos in Tripoli” which extended to almost every sector of life, with of crime on the rise, ordinary people being terrorised, power misused and public money wasted.

More solid support for Ghwell call, though, came from Benghazi HoR member Ziyad Daghim, who is one of the leaders of the hardline National Sovereignty Bloc which is firmly opposed to the Libyan Political Agreement (LPA). In a phone call on Libya’s TV channel, he welcomed the move.

The Libya Herald has learned, though, that proposals for a joint government comprising the Thinni administration and the one headed in Tripoli by Ghwell until the arrival of the Presidency Council were put to Thinni last month. The idea was that it would act as a temporary government for all Libya until the HoR approved the LPA and appointed a government of national accord.  Thinni, however, is alleged to have rejected the idea because he was not proposed as prime minister.

This evening, Ghwell declared on TV that he was in completely control of the capital.

For his part, Thinni today met with members of the National Sovereignty Bloc to discuss developments including the Tripoli coup.