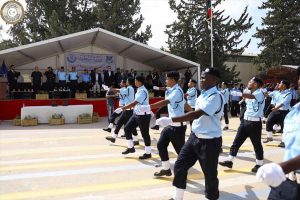 While the Rixos coup leaders remained behind their protective militia cordon within the High State Council complex, Presidency Council head Faiez Serraj has been out and about in the capital.

At the passing out parade for police cadets at the Interior ministry on the Airport Road, who it is reported had been hired and trained to protect the ministry itself, Serraj said that there would be zero tolerance for those who sought to undermine the Libyan Political Agreement and instead sow chaos.  He repeated that he had instructed the security forces to arrest coup leader Khalifa  Ghwell and his fellow plotters and he meanwhile ordered them to evacuate the buildings they had seized.

Despite the degraded security in the capital, Serraj also demonstrated sang froid by visiting the hospital at Abu Sleem. There he was shown around the wards, met doctors and thanked them for their work in the face of considerable difficulties.

As he moved from the prime ministry to Abu Sleem and further down the Airport Road to the Interior ministry Serraj travelled in an hard-skinned vehicle within a heavily guarded convoy.