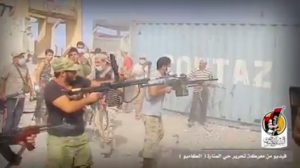 There has been a marked ramp in air strikes on Sirte. In just three days US aircraft have struck 96 targets in the course of 36 sorties against IS positions. The extent of the devastation on buildings in the town’s Third District is clear from images posted online by Bunyan Marsous.

The majority of the strikes was against terrorist “fighting positions”  said US Africa Command but one targeted an IS command centre and another successfully destroyed a suicide bomber’s vehicle before it could reach BM lines.

A Reuters journalist advancing with forward forces reported they came across tunnels, booby traps and an abandoned field hospital after they had overrun the Campo area. There were also badly charred bodies of IS members killed in the air strikes. On social media a BM fighter posted pictures of a pickup truck into the back of which at least eight dead terrorists had been thrown without ceremony.

US aircraft have not only been dropping bombs guided by foreign specialists on the ground. Last week there were at least two drops of leaflets urging IS forces to surrender and give themselves the chance to see their children grow up. It appears the propaganda may have influenced eight Eritrean women to cross over to BM lines on Sunday. Pictures of their frightened, even traumatised faces, were published by the BM media office. It is not clear what has since become of the eight.

The Libya Red Crescent has publicised its operation to bring food and shelter to Sirte citizens who had been caught up in the battles. Footage shows the damage caused by fighting to a large number of properties, which had also often been looted. There was the further hazard of abandoned shells and booby traps. One local resident explains that he and his neighbours have been left with nothing, no power, no cooking gas, no food, no water and no fuel.

Red Crescent trucks have begun running into the town with emergency food packs and blankets .