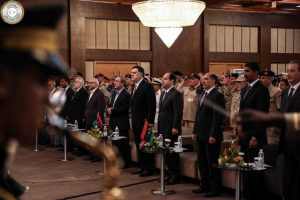 A row has erupted between Presidency Council member Fathi Majbri and other members of the Council after a meeting in Tripoli of military officers from the west of Libya called Khalifa Hafter a “war criminal”.

The meeting, which also called on the PC to appoint a general commander for the Libyan army within 30 days, was attended by Faiez Serraj, the head of Presidency Council (PC), as well as two of his deputies, Ahmed Maetig and Abdulslam Kajman, State Council head Abdulrahaman Sewehli, and the PC’s acting defence minister, Mahdi Barghathi.

Also reported at the gathering were members of the Benghazi Defence Brigades, viewed by Hafter and the Libyan National Army as terrorists.

Majbri has condemned the presence of his colleagues at the meeting and demanded an explanation as to what was going on.

“Having learned about the event through the media, I was surprised at the presence of some leaders of what is called the Benghazi Defence Brigades, which the Presidency Council a while ago categorised as a terror group” he said.

“I demand the head of the PC and its members clarify their position on this event. This, he added, was crucial if he was to continue “on the road of accord”.

The statement about Hafter from the military was drawn up after Serraj and others had left the meeting at the Mahary Hotel in Tripoli.

Following the statement, Serraj’s media office posted it with the reference to Hafter stripped out. Instead the PC called for unity among Libyans and said that it would not allow anyone one to stir up division.

However, on the pro-Islamist Nabaa TV, a representative of the officers repeated the line that “we consider the named Khalifa Hafter is a war criminal”.

The officers’ statement also said that they rejected “any kind of attempt to take over power through coups” – a reference to attempted coup last week by the rump of the General National Congress and Khalifa Ghwell.

In his speech to the officers, Serraj said that the army was needed to ensure security and stability and that there needed to be a single, united army in which no one was excluded. Achieving this was a challenge, he said, but there was no alternative. Division, he added, had allowed terrorism to enter the country.

As to Ghwell’s attempted coup, it would be dealt with without recourse to violence. “We will end this firmly through the force of law,” he said. He also added that he was working to get the international arms embargo on Libya lifted.

The call for unity in the armed forces, was echoed by Mahdi Barghathi. “The Libyan army must represent all Libyans and not a person, a city or a group,” he said.