Army gears up for Benghazi attacks 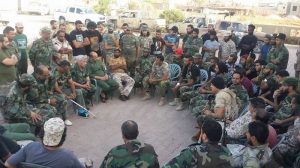 The army officer in charge of the anti-terrorist fight in Benghazi has briefed his area commanders ahead of what an army source says will be an operation to retake two key areas of the city.

Brigadier General Abdul Salam Hassi is understood to have spoken of operations in Sabri and Suq Al-Hud, the two downtown areas which despite being isolated for much of the year, have managed to hold off all attacks.

Meanwhile, the drive to take Ganfouda, the last main concentration of militants, has been stalled largely by concerns over high civilian casualties and the international impact that would have.

IS and Ansar Al-Sharia terrorists, along with their allies in the Benghazi Revolutionaries’ Shoura Council have demanded that their families be allowed through army lines, a demand backed up the international community including UNSMIL chief Martin Kobler.

The army has said that everyone passing through the security cordon would have to be searched, a condition to which it is reported the terrorists refuse to agree.