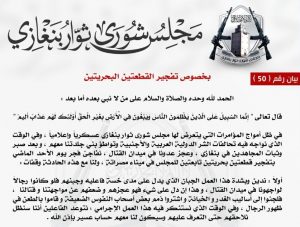 Part of the BRSC statement protesting sinking of their supply boats

The Benghazi Revolutionaries Shoura Council has protested that two of its vessels have been sunk in Misrata where they were tied up to a quay belonging to LISCO, the Libyan Iron and Steel company.

This is the first time that the BRSC has admitted owning craft which have almost certainly been running weapons, supplies and reinforcements between Misrata and the Benghazi resort of Ganfouda where the army claims to have completely cut off the BRSC and its allies, the IS and Ansar Al-Sharia terrorist groups.

In their statement Number 50, the BRSC has described last Sunday’s attack on their vessels as cowardly and vowed to revenge themselves on those who had carried it out. It did not reveal how the boats had been sunk.

It said “While the BRSC is busy challenging the media and military conspiracies against it, we were surprised by the explosions early  Sunday morning on boats at Misrata port belong to the BRSC”.

The militia then went on to warn the “good people of Misrata” not to give any support to the Libyan army and “its factions”.

There was jubilation in February when the army took the small port of Mreisa, which had been the militants’ key supply base. It was widely assumed that the BRSC and its terrorist allies in their main Ganfouda-Gwarsha concentration and downtown outposts in Sabri and Suq Al-Hud would collapse for want of supplies.  That did not happen because the weapons, ammunition and men continued to arrive and wounded were evacuated.

In April two other vessels believed to be used to supply the BRSC and its allies in Benghazi were sunk at their moorings, also on the LISCO quay in what were thought to be the explosion of limpet mines. A promised Misratan enquiry is not known to have reported.

There have been naval and air patrols off the Benghazi coast, one of which this June led to a major explosion on board an arms smuggling vessel.